Japanese kimono is the result of the beauty and craftsmanship cultivated for over 1000 years in Japan. It is one of the most admired national costumes in the world. However, what makes a kimono so distinctive is not only the kimono itself, it is the person who wears kimono. At Kimono Experience, we would like to share opportunities to experience kimono with you and show you something special about Japanese culture which is based on respect, appreciation and care. Let’s enjoy kimono! 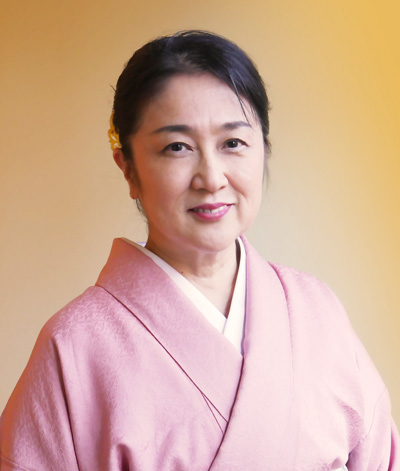 Emi Kikuchi is a native of Japan, she came to the U.S. in 1989.
Emi is a certified Shihan (master) Kimono Teacher who can issue certificates from the institute in Japan.
She studied at the Naganuma Shizu Kimono School, which is considered one of the top schools in Japan. Emi teaches classes in New York City regarding kimono dressing, proper setup, and appropriate fashion standards.
In 2007, she established the “Kimono Experience” initiative in New York City, presenting the rich tradition of Kimono at various public events such as the Kimono Show at Queens Flushing Library in 2007, 2013 and 2016 and Yukata Show at Japan Block Fair in 2013.
Emi also gives Kimono workshops in schools and provides rental services for photo shooting on various occasions such as wedding ceremonies.

Most recently, Emi was featured in “Age of Enchantment” produced by Japan Performing Arts, Inc., in October 2017 and dressed models in Japanese traditional wedding kimono. Also in May 2017, Emi presented a kimono show and a lecture in “Ai and Sensui Calligraphy & Kyoto Culture” at Queens Museum in May 2017. Emi presented a kimono show in Japan Fest in Atlanta, Georgia, produced by the Consulate General of Japan in Atlanta in September 2016. Recent credits are following.
Presented a kimono show at Flushing Library in February 2016.
Featured in Japan Cultural Repertoires produced by Japan Performing Arts, Inc. and performed obi-tying demonstration in November 2015.
Produced a kimono show in “Waku Waku +NYC” in August 2015 and presented various pop kimono styles.
Presented her skill in dressing traditional wedding kimono on stage in “Japan Week 2015” at Grand Central Terminal in February 2015.
Performed “Obi-Tying Demonstration -Kimono: A Modern History” in October 2014, and “Gallery Talk- Get Wrapped Up: Poetry and Art of the Kimono” in December 2014 at The Metropolitan Museum of Art.

Ms. Kikuchi is also an actor and a voiceover expert in Japanese. Among various productions in New York she appeared, she played rolls in Kimono many times. In the movie “Drawing Restraint 9” with Ms. Sachiyo Ito, who is the Japanese classical dance master, she dressed Mr. Matthew Barney and Ms. Bjork in their wedding kimono.